Origins of the Breed

ORIGINS AND THE FUTURE

Any attempt at an appreciation of the origin of the Galway breed must include an overview of the stock of livestock breeding in England in the 1700s, especially in the latter half of that century. This was a period of intense activity in the remaking of breeds of both cattle and sheep, and probably not unrelated, a time of considerable activity in the production of written accounts on the state farming in the various regions of Great Britain and Ireland. Thus we have written accounts which not only describe many developments in relation to breed development but also serve to show that many different breeds were at that time established in the various regions of England in particular. The information on Ireland, Scotland and Wales is much less extensive, probably reflecting the peripheral status of these regions in the political power structures of the time. 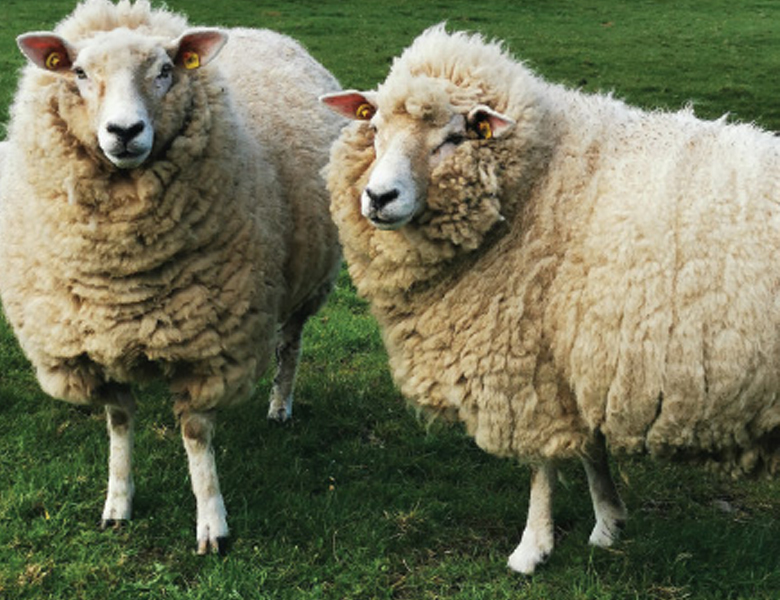 1. Short-woolled mountain sheep.
2. A long woolled type which extended with “pretty uniform characters" over the "greater part" of the central plain.

These writers also refer back to accounts of the sheep in Ireland in the early part of the last millennium as producing brown wool based on observations of the monk Giraldus Cambrensis who visited Ireland in the 12th century. Clearly there had been considerable change in the type of sheep in Ireland up to the end of the 18th century. By around 1790 Mr. Robert Bakewell of Leicestershire had become firmly established as the source of long-woolled sheep which were better suited to the market requirements of the time he had developed and perfected a New Leicester breed out of sheep breeds and types available in Leicestershire and neighbouring counties of Lincolnshire, Warwickshire in England.

There is an abundance of evidence that the New Leicester of the 18th century were imported into Ireland and used widely. Indeed importations of other long-woo! breeds prior to the emergence of Bakewell's New Leicester is certain to have occurred with breeds such as the Lincoln and Cotswold mentioned in the writings of commentators on an agricultural matters. In the early decades of the 19th century Low (1845) stales that "crossing with the new Leicester Breed", which began during the last quarter of the previous century, ”has been continued with such success that it is now difficult lo find an individual of the unnamed race in the whole country”,

The widespread use of New Leicester rams is indicated in the observations of Youatt (an English writer) about farmers who in 1801 leased rams from a breeder in Co. Kilkenny, The Leases were from counties Sligo. Mayo, Roscommon, Offaly, Tipperary, Westmeath, Kildare and Cork. (It may be of interest to note that the fee per ram varied from 20 to 150 guineas at the time.) It is reasonable to infer that many sons of these rams found extensive use in the regions mentioned. Thus was the transformation of lowland sheep effected so that Youatt (1837) could comment that County Galway “produces a great number of sheep and is a high a state of perfection as any of the other sheep districts". In his Survey of Co. Galway, Dutton (1824) states that the original sheep "have nearly all disappeared and given place to a fine breed not to be equalled by the general stock of the long-woolled breed in England”.

There is a paucity of written accounts on the breed development in the second half of the 19th century not surprising given that this was a period of the potato famine and its aftermath but undoubtedly livestock breeders continued in their quest for the breeds most suited to prevailing circumstances and surely also under the influence of the contemporary fashions of agriculture. There was an extensive development of the Down breeds in England during the first half of the 19th century and records show that this continued apace in the second half. Thus it was not until 1859 that the name Suffolk came into use prior to this date they were known us “Southdown-Norfolk’s” or “Blackfaces”. The Suffolk was derived from a combination of the Southdown breed and the old Norfolk Horn breed. The Southdown breed was the predominant influence in the development of the Down breeds that we know today (such as Oxford Down, Hampshire Down and Shropshire).

It is interesting to note in passing that original reactions to the Suffolk were often very critical thus at the Royal Show of Bury St. Edmunds in 1867, in the heart of Suffolk county, the breed was condemned for it's long legs, short ribs, thin necks, hare backs and naked heads". This should remind us of the frailly of established wisdom in the matter of which breed is best. The accounts of sheep breeding in the 100 years to about 1870 show that breeds which are now considered as if they always existed were developed by combining together genetic material from different breeds and races - a process used in this county to develop the Belclare breed over the last 20 years.

So whence the Galway?

The historical record does not suggest any perceived diversity between the long-woolled types found on the central plain of Ireland in the early to mid 19th century. There is considerable evidence for the use of New Leicester’s and also for the existence of Southdown, Cotswold and Merino flocks particularly around County Kilkenny. There is also evidence that Southdown and Merino sheep were imported into County Galway during the 18th century. Thus there was active breed development in this region involving a variety of breeds.

In 1870 an Irish long-woolled breed was recognised by the Royal Dublin Society under the name of the Roscommon breed and included in catalogues of shows in subsequent years. The prize winners were usually from North Roscomrnon and midland counties. However up to at least 1847 these sheep were still being referred to as the unproved Irish long-woolled breed, Thus between this date and 1870 a group of enthusiasts perused the establishment of a class from Roscommon long-woolled sheep at the RDS. Twenty-five years later 1895 a breed society was formed (called the Roscommon Sheep Breeders' Association) at Tulsk. The principal members were located in North Roscommon (Tulsk, Castlecrea, Elphin, Strokestown, Drumsna), The Association had, however, become defunct by the mid 1920s and from 1937 onwards the breed was no longer listed in RDS catalogues.

The Galway Sheep Breeders' Society was formed in Athenry in 1923 and this event is surely connected with the decline in the activities of the Roscommon Breeders' Association and likelihood that interconnections between North Roscommon and sheep producers in the Athenry region would be relatively weak. The initial flocks in the Galway Flock Book were located in Headford, Claregalway, Oranmore, Ardrahan, Gort, CraughwelL Loughrca, Kilconly, Menlough, Tuam, Belclare and Athenry. 'The Agricultural College in Mountbellew was also directly involved through Bro, Jarlath, who was a member of the first council of the society. In the years after the formation of the Galway Society the Galway and Roscommon breeds were both included in RDS shows until the demise of the Roscommon in 1937.

It is my view, based on the available evidence on the thrust of breed development in Ireland that the Galway breed came into existence as a name change for the common long-woolled type which had been developed in the central plain of Ireland through the period up to the mid 18OOs. Since the lowland regions of Connaught were the principal breeding area it is not surprising that counties in Connaught provided names for the Irish long-woolled breed.
The selection of animals for entry into the first flock book of Galway sheep (published in 1924) followed a similar pattern to that used in North Roscommon 28 years earlier, but probably entailed more intensive selection. The account in the flock book states that over 6000 ewes and 200 rams were examined by an inspection committee and 600 ewes plus 20 rams were admitted to the flock book a total of 23 flocks were established by this process. The number of flocks of registered Galway Sheep has fluctuated over the years as will be indicated in a later section.

The Galway breed was the predominant lowland type in the middle of the present century, but decline in importance from the mid 1970s as Suffolk-cross lambs became more popular for the production systems and associated markets. By the 1980s the number of Galway sheep was in serious decline as was the membership of the Galway Sheep Breeders’ Society and, consequently, the number of registered pedigree Galway’s. The following table presents an outline of the changes in the pedigree Galway sector up to 1998. Over the period from 1975 to 1992 national statistics show that the percentage of Galway ewes, relative to all lowland ewes, declined from 61% to 8%, a remarkable change. 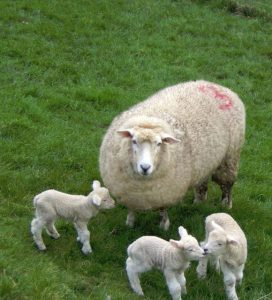 The major decline in numbers of Galway sheep and especially the decline in the pedigree population raised the prospect that this sole Irish Sheep breed and reservoir of the breed developments in this country from the I8'th century onwards would be lost forever. Consequently, various steps have been taken to ensure that the Galway breed is conserved for further generations. In particular the Galway is now officially listed as a "breed in danger of extinction" and as such qualifies tor financial support under the Supplementary measures of Glas Scheme. This has encouraged sheep enthusiasts in various parts of the country to keep purebred Galway sheep and led to an increase in the number of registered breeders and in the size of the pedigree Galway population, A further set of measures has been supported by the Minister of Agriculture through the Advisory .Committee on Genetic Resources for Food and Agriculture. The measures supported include:

1. The development of new computerized procedures to facilitate the collection and maintenance of performance and pedigree information for registered Hocks,
2. The publication of a Flock Book covering the years 1977 to 1996.
3. A research and development project (currently underway) to
3.1. Ensure the adoption of improved methods for record keeping and animal identification
3.2. Establish the opportunity cost of keeping purebred Galway sheep
3.3. Establish the extent of the non-registered population of Galway sheep
3.4. Analyse the structure of the pedigree population and develop guidelines for effective conservation of the breed.

The overall objective is to ensure that the breeders of pedigree Galway sheep are equipped with the knowledge and methods to ensure the conservation of this uniquely Irish genetic resource for many, many years to come.

As progress continues on understanding the biology of domestic animals and the interactions between livestock and their environment, and in particular the sustainability of livestock production systems, who is to say but that the Galway breed may well, in the future, prove invaluable for livestock production on the limestone plains of Ireland.