Report of Show and Sale 2016
The 94th Annual Show and Sale of Galway Sheep which was held recently in Athenry attracted a large gathering of people from many parts of the country. The female sheep and the ram lambs sold very well but, as was the norm at all sheep breeding sales in 2016, the hogget rams were slightly harder sold.

On the day a few lots were withdrawn and were later sold privately. Seán Kilkelly received exceptional prices for his two hogget rams and this class was won by Martin Warde. John Greaney featured very strongly in the ram lamb class. In the female section Martin Maher, Gerry Daly and Gerry Nolan were the winners in their respective classes while Martin Maher captured the Joe Casey Cup for the champion female sheep of the show. Seán Kilkelly and Tom Murphy won the two wool classes. Tom Feeney, Marie Reaney, Hubert Melia, Edith Lambe and Maureen Casey were also among the prize-winners.

Padraic Niland, Henry Hughes and Michéal Conneely were efficient judges while Padraic Naughton conducted the sale smoothly and efficiently. The presence of Tom Sice and Festy Conry maintained the link with the great sales of the 1960’s. 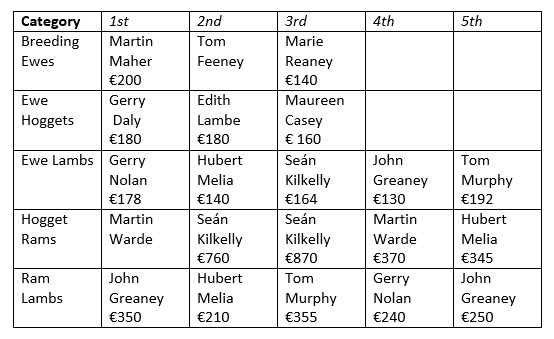 The breeders also recently held their AGM in the Raheen Woods Hotel and it was very well attended. The secretary, Tom Murphy, gave a comprehensive account of the year’s activities and he expressed his satisfaction with the Ovigen project and the DNA testing which was carried out to verify parentage in selected flocks. Several members expressed their concern at the increasing workload which the secretary is obliged to undertake in order to keep the Association compliant with Dept. of Agriculture regulations.

In his chairman’s address Gerry Daly recalled the state of the Association in 1966 when An Foras Taluntais, the forerunner of Teagasc, were conducting trials on 1,000 Galway Ewes at their facility in Roundfort on the Galway/Mayo border. He stated that since the retirement of Dr. Seamus Hanrahan Teagasc have not been actively involved with Galway Sheep.

Tributes were paid to the late Marie Kenny whose unexpected death was deeply felt by the Association and her wise counsel and endearing presence will be sadly missed.

The outgoing officers were all returned and in addition Mary Glynn was elected as Assistant Sec.